The highlight race of the winter-spring meeting is the $250,000 Jeff Ruby Steaks (G3) (formerly the Spiral Stakes), contested at 1 1/8 miles on the Polytrack worth 20 points to the winner as part of the Kentucky Derby Championship Series, run 7 weeks before the Kentucky Derby. Light rain fell for most of the card with temperatures in the high 30's, however due to the COVID-19 pandemic, the races were conducted without spectators. Invader was sent off as the 6-5 favorite in the field of 11 off his win in the John Battaglia Memorial, the main local prep for this event. In to challenge him included 7-2 second choice Field Pass, winner of the Dania Beach over the Gulfstream turf, and 6-1 third choice Myamanoi, 4th in the Dania Beach.

Jockey Florent Geroux sent 13-2 fourth choice Fancy Liquor to the lead first time by through fractions of 23.76, 47.78, and 1:11.72 while pressed by Invader and stalked by Field Pass. Turning for home Invader gained a short lead through 1 mile in 1:36.30, but Field Pass, moved 3 wide for room by jockey Irad Ortiz Jr., rallied to get up by a neck in 1:49.34. It was another 2 lengths back to Fancy Liquor third. 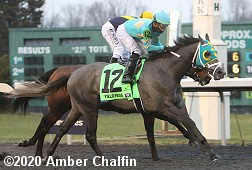 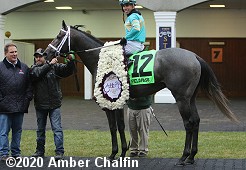 Field Pass in the winner's circle. Winning trainer Mike Maker said, "He's a good-sized horse. His conformation's great. Great mind on him. I was getting worried right down to the wire. I try to bring some of my better turf horses for the Ruby. It's paid off over the years. He ran a great race off the bench in the Dania Beach in a very competitive field and I thought he would run very well here." Field Pass is not Triple Crown nominated and Maker said he likely will go next in the American Turf (G3) on the Derby undercard.

Winning jockey Irad Ortiz Jr. said, "He broke sharp coming out of there. He put me in a good spot in third, outside the favorite and I tried to wait. I was close; I wasn't too far back. When I asked him, it took some time to get going. It wasn't easy to catch him (Invader), but he got the job done. They went a little slow, my horse wanted to go really bad and I didn't want to struggle with him, so I let him go." 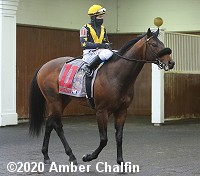 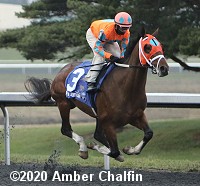 Left: Second place finisher and beaten favorite Invader in the paddock. Jockey Albin Jimenez said, "He was on the bit on the backstretch and I had to take a little hold. He's a game horse. 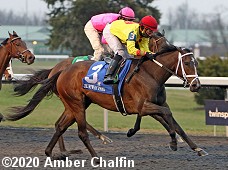 The distaff counterpart to the Jeff Ruby is the $150,000 Maxim Crane Works Bourbonette Oaks, worth 20 points to the winner in the Kentucky Oaks Championship Series. After 2 scratches a field of 11 three-year-old fillies went to post in this 1 mile Polytrack contest, with Sweet Life (G3) winner Laura's Light sent off as the 9-10 favorite over 4-1 Impeccable Style, 5th in the Rachel Alexandra (G2), and 5-1 Pass the Plate, 3rd in the Shantel Lanerie Memorial.

Jockey Rafael Hernandez sent 33-1 Swanage to the lead first time by through fractions of 23.91 and 47.64 while pressed by Laura's Light and stalked by Impeccable Style. Turning for home Swanage tired allowing Laura's Light to take over through 3/4 in 1:12.08 and 7f in 1:24.86. In the final furlong Laura's Light tired as 13-2 fourth choice Queen of God, 4th early under Irad Ortiz Jr., rallied to win by 3/4 length over Pass the Plate in 1:37.77. It was another 1 1/2 length back to Impeccable Style third, and 1 more to favorite Laura's Light fourth. 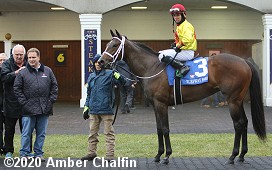 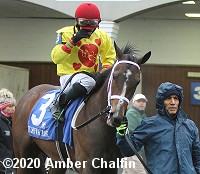 Left: Queen of God in the winner's circle. Winning trainer Mike Maker said, "She was in great position to win. This was her first race on Polytrack. Very pleased with result. She's a very game, aggressive filly. The owners are out of the country, so we haven't really communicated (for next start)."

Right: Queen of God in the paddock. Winning jockey Irad Ortiz Jr. said, "I got a perfect trip, I can't complain. She broke good, put me in a perfect spot. I was waiting, and when I asked her she responded for me. I changed (my whip) to the right hand and she kind of got out, so I just put the stick away." 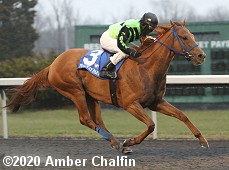 Jockey Albin Jimenez sent 39-1 Lanier to the front while pressed by 56-1 Dragon Bay and stalked by 35-1 Moon over Montana and 30-1 Flying Scotsman. Turning for home, Nun the Less, 8th early under Rodney Prescott, came out 4 wide to sweep to the lead at the 3/16 pole. Kept to task by Prescott, Nun the Less drew off to win by 4 1/2 lengths over favorite Somelikeithotbrown in 1:48.80. It was a head back to 8-1 Signalman third. Due to a timer malfunction the race was hand-timed so internal fractions were unavailable at time of writing. 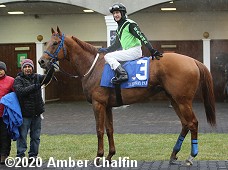 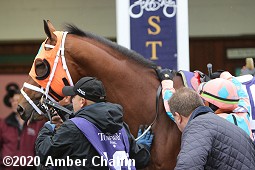 Left: Nun the Less heads to the winner's circle. Winning jockey Rodney Prescott said, "The horse has been doing great since he came back off the layoff. (Trainer) Cipriano (Contreras) has done a great job with him. He took his time bringing him back. The horse couldn't be doing any better. He does like this track and he had a great trip. I couldn't have asked for anything better today. He broke real sharp. I had to take him back a little bit. We were a little wide, which doesn't hurt you here. We had a good trip with plenty of horse to finish with."

Right: Second place finisher and beaten favorite Somelikeithotbrown in the paddock. Trainer Mike Maker said, "It's not what I was expecting. He was farther back than I expected. But there's nothing I can do about it." 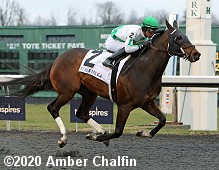 The $100,000 Rushaway Stakes featured a field of 7 three-year-olds going 1 1/16 miles on the Polytrack. Vanzzy, who failed to finish in the Withers (G3) last out, was sent off as the 2-1 favorite over 3-1 allowance winner Something Natural, and 7-2 Uncork the Bottle, 2nd in the Sage of Monticello Stakes. Jockey Kendrick Carmouche sent Vanzzy to the lead through fractions of 24.13, 47.93, and 1:11.51 while pressed by Uncork the Bottle and stalked by Something Natural. Turning for home Vanzzy left the field in his wake, drawing off to win by 4 1/4 lengths over late-running 4-1 fourth choice Blanket of Roses in 1:43.89. It was a neck back to Something Natural third. 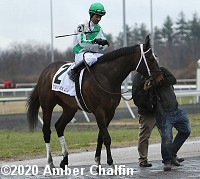 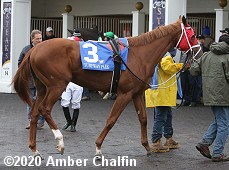 Left: Vanzzy heads to the winner's circle. Winning trainer Michael Pino said, "There wasn't a lot of speed in here, so we sent him from there and it worked out. We won on Poly last year, so I wanted to get him back on Poly one more time. I'm not sure he needs it, but I wanted to get another win out of him. We'll have to wait and see how he comes out of here. We have some options."Winning jockey Kendrick Carmouche said, "The horse broke sharp, so I just let him float out there and do what I do best: put ‘em to sleep and ride him hard home. I had so much horse underneath me, even to the wire he was just waiting for more competition."

Right: Second place finisher Blanket of Roses in the paddock. 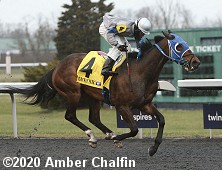 Winning trainer Doug Danner said, "My jockey kind of likes to get there (go to the lead). I tried to tell him, if we don't break good and the 1 or 3 wants the lead, we can lay second or third, but he likes to go, go, go. He's been riding her really good (they're currently five for five). She's doing as good as a horse can be doing. She's stabled here all winter and she has dapples the size of silver dollars. I'm just going to sit and enjoy this. I deal with five and ten thousand dollar horses, so I'm not thinking about what's next. I'm just going to enjoy this." 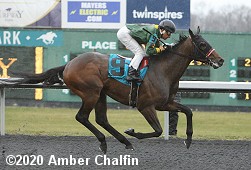 Kicking off the stakes sextet on Saturday was the $75,000 Mayers Electric Company Animal Kingdom Stakes for 3-year-olds sprinting 6 1/2 furlongs. 10-1 My Man Flintstone set the pace while pressed by 95-1 Williston Way and stalked by 6-1 Bango. Turning for home jockey Rafael Bejarano sent Bango to lead and he drew off to win by 2 1/2 lengths over My Man Flintstone in 1:16.50. It was another head back to 11-10 favorite Merchants of Cool third. Due to a timer malfunction the race was hand-timed so internal fractions were unavailable at time of writing.

Winning trainer Grey Foley said, "It was a little nerve-wracking when he was that close to the early pace. They were flying up front but he won very impressively. It was great to team up with Rafael again and it was very special for Fred and Debbie Schwartz to win with a homebred. He ran huge." Winning jockey Rafael Bejarano added, "I had a beautiful trip. I got to stay outside with a perfect post. Gave the horse a chance to get good position, get him in the clear and he was much the best today. I'm really happy to run for Greg Foley, he always helps me, so I was really glad to win for him."